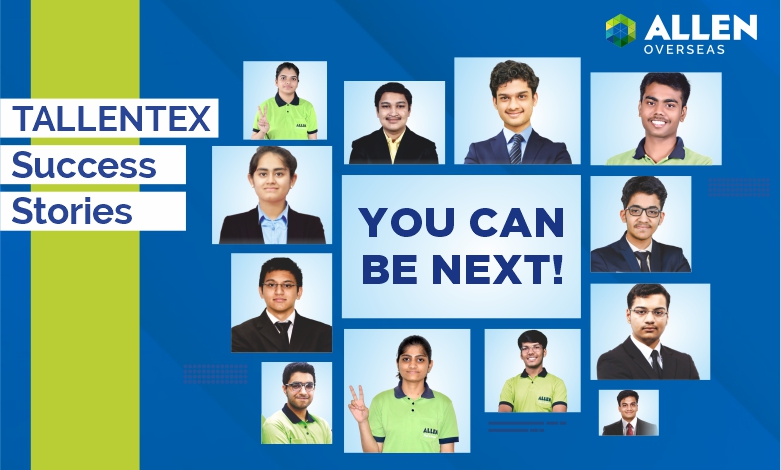 Recognizing and rewarding students’ talent is a tradition at ALLEN, which has been carried through TALLENTEX for years. TALLENTEX – an acronym for ALLEN’s Talent Encouragement Exam, is a specially designed initiative to encourage and reward young talents with scholarships, cash prizes & much more. The exam provides all aspiring students (especially those who come from weaker economic backgrounds) a chance to win scholarships and conveniently prepare for competitive exams at ALLEN.

Launched eight years ago in 2014, it has become India’s Biggest Talent Encouragement Exam. The exam provides unparalleled exposure to students who wish to appear in national or international examinations. Over the years, TALLENTEX has transformed many dreams into successful careers. Let’s look at how TALLENTEX laid the foundation for future success…

Tanishka started her success journey with TALLENTEX. She appeared for TALLENTEX 2018 and secured AIR-331. Over the years, she studied hard and improved her academic performance. After securing AIR-70 in TALLENTEX 2019 and AIR-23 in TALLENTEX 2020, she finally made her mark by securing AIR-1 (All India Rank-1) in NEET-UG 2022.

Sneha, another ALLENite, also began her journey toward success with TALLENTEX. She appeared for TALLENTEX 2020 and secured AIR- 1489, after which she decided to pursue her dreams under ALLEN’s expert mentorship and finally achieved AIR-2 (All India Rank-2) in JEE MAIN 2022.

Mridul’s journey tells us that success is the result of the right decision taken at the right time. With a dream to become an engineer, he embarked on his journey toward success with TALLENTEX. First, he participated in TALLENTEX 2017 and secured AIR-168. Then, he joined ALLEN to improve his academic skills. His hard work was reflected in his results when he progressed from AIR-50 in TALLENTEX 2018 to AIR-12 in TALLENTEX 2019. Eventually, he achieved AIR-1 in KVPY 2020 and AIR-1 in JEE MAIN & JEE ADVANCED 2021.

Soyeb’s journey proved that TALLENTEX brings assured success to the participating students. He started with AIR-51 in TALLENTEX 2018 and joined ALLEN to accomplish his career goal. Ultimately under the guidance of ALLEN’s best academicians, he achieved AIR-1 with 720/720 marks in NEET-UG 2020.

Kartikey showed us that a bit of progress each day adds up to big results. He started with a dream to become an engineer. To achieve that dream, he participated in TALLENTEX 2018 and secured AIR-28. And finally, after being coached by the edu-experts of ALLEN, he fulfilled his career dreams by securing AIR-1 in JEE ADVANCED 2019.

Nalin also started his journey towards his dream medical college with TALLENTEX. He participated in TALLENTEX 2018 and secured AIR-547. With his determination, dedication and ALLEN’s support, he secured AIR-1 in NEET-UG 2019.

Words fail people when they want to describe Stuti’s achievements. A wonder girl who cracked AIIMS, NEET-UG, JEE & JIPMER also began with TALLENTEX. After securing AIR-25 in TALLENTEX 2016, she created history by achieving AIR-10 in AIIMS 2019, AIR-71 in NEET-UG 2019, AIR-1086 in JEE MAIN 2019 and AIR-27 in JIPMER 2019. TALLENTEX gave her preparation the right boost.

TALLENTEX laid the groundwork for Archit’s success. He, too, started by appearing in TALLENTEX 2016 and secured AIR-1. Moving ahead with the same passion and persistence, he eventually achieved AIR-2 in NEET-UG & AIIMS 2017.

Aman’s achievements also started with TALLENTEX. After securing AIR-18 in TALLENTEX 2015, he amplified his academic performance and ultimately achieved AIR-1 in JEE Advanced 2016.

Aman’s journey showed us that you could achieve anything if you set your mind to it. He started with AIR-1684 in TALLENTEX 2019 and began his preparation under the mentorship of ALLEN. Finally, his hard work paid off when he secured AIR-4 in NEET-UG 2021.

Suyash also decided to embark on his success journey with TALLENTEX. He appeared in TALLENTEX 2019 and secured AIR-186. Eventually, he got closer to his goals and secured AIR-5 in NEET-UG 2021

Arnav’s goal was to become a successful engineer, and he started on his path to success with TALLENTEX. After securing AIR-176 in TALLENTEX 2019, he achieved a grand feat with AIR-9 in JEE Advanced 2021.

And now it’s your turn to shine because the Biggest Talent Encouragement Exam is expanding to GCC as TALLENTEX Overseas for students studying in grades V to XI in UAE, Qatar, Bahrain, Oman, Kuwait and Saudi Arabia. So gear up to compete & win globally. Register yourself now to write your own success story by clicking here.

Q: How should I register for TALLENTEX Overseas?

A: To register for TALLENTEX Overseas 2023, follow the given steps:

Q: Is TALLENTEX Overseas only for ALLEN students?

Q: What is important for student success?

A: Self-belief and consistency are the two most important factors for students’ success.

Q: How many hours are enough to study for an exam?

A: Study hours vary from person to person, but generally, toppers have studied for about 7-10 hours every day.

Q: Are there any everyday habits of toppers?

A: Every individual’s habits and behaviour are different, but they exhibit a few everyday habits. You can find out more about them by clicking here.